Your Recharge integration ingests data from Recharge and combines it with data from Shopify and Google Analytics to give you complete analysis of your subscription offerings and subscribers.  However you may notice some discrepancies in the way that Recharge data appears in your Subscriptions Dashboard vs how it appears in the Recharge reporting UI. 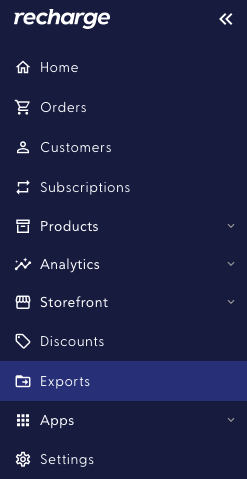 Click the Create Export button, select the report that you want, and the email address you want it to be sent to:

If you have a large group of manually cancelled or deleted subscriptions that are throwing off your metrics, please contact support@daasity.com.  Our support team may be able to manually fix this issue.