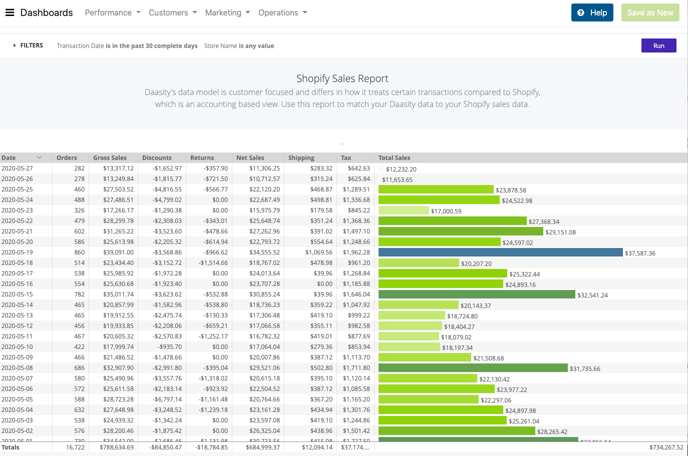 You’ll find the Total for the period at the bottom of the table. This dashboard is at the daily level. To change the time frame, simply edit the Filter at the top of the report.

To view a different time dimension, such as by month:

DEFINITIONS OF MEASURES IN THIS VISUALIZATION:

Shopify recently changed the Sales Over Time report to include Duties.  As of 01.20.22, Daasity is actively working on ingesting this new data and adding it to our data models and reports.

Q: What currency is the report in?

Q: What time-zone is the report in?

A: The time-zone will match the time zone specified in your Daasity account

Q: How can I look at individual orders?

A: Go to Tile Actions -> Explore from here. This will open up the Shopify Sales Report explore. Here you can add in either order id (the Daasity order id), store order id (order id from Shopify) or order code (order name in Shopify).

Q: What if the numbers don’t match the Shopify report?

A: If all measures are slightly off, the likely cause is that the Looker Shopify Sales Report is incorrectly converting time zone for your account. Other issues might include the inclusion of Duties (see above).  Please reach out to Daasity support and someone on our team will investigate and quickly roll out a fix.

The Shopify Sales Report requires that you have a Shopify integration with Daasity.